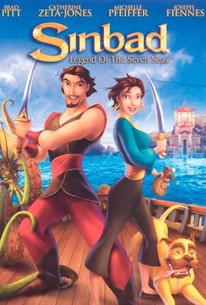 Sinbad: Legend of the Seven Seas

Competent, but not magical.

The legendary rogue of the seven seas confronts a new assortment of dangers and thrills in this animated action-adventure tale. Sinbad (voice of Brad Pitt) and his crews of pirate adventurers are hoping to retire to Fiji, and they discover a treasure that could make that possible -- the Book of Peace, which has kept the Twelve Cities in harmony for centuries. But Sinbad's plan to snatch the magic book is complicated when he learns it's on board a ship captained by his longtime friend Proteus (voice of Joseph Fiennes). While Sinbad still has his eye on the book, so does the mischievous goddess Eris (voice of Michelle Pfeifer), who sends a deadly sea monster into Sinbad's path to scuttle his plans. With the help of Proteus, Sinbad prevails over the beast, and determined Eris responds by snatching the book and framing Sinbad for the crime. Noble Proteus offers to step in for Sinbad and take his punishment, so now the adventurer has ten days to rescue the book from Eris or Proteus will pay with his life. While Sinbad is at first uncertain if he should take on such a dangerous assignment or simply high-tail it to Fiji, someone is on hand to persuade him -- Marina (voice of Catherine Zeta-Jones), Proteus' lovely but hard-headed fiancée, who has stowed away on Sinbad's ship. Sinbad: Legend of the Seven Seas was the first animated feature written by John Logan, who received an Oscar nomination for his script for Gladiator.

News & Interviews for Sinbad: Legend of the Seven Seas

Critic Reviews for Sinbad: Legend of the Seven Seas

Audience Reviews for Sinbad: Legend of the Seven Seas