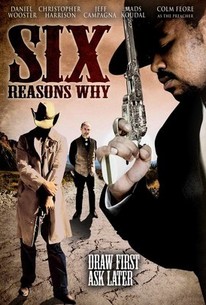 In a future where society has come full circle and man lives by the code of the cowboy, a fugitive, a vengeful son, a killer, and a shifty servant stand in a four-way face-off from which only one man can walk away. To the east lies seven boomtowns connected by railroad, and to the west is a Utopian community that cowers in fear of the outside world. Dividing these two areas is an arid stretch of desert known only as "The Badlands." Few who go into the Badlands are ever seen again, and when "The Nomad" is cast out from his hometown in the west he vows never to let a living soul reach Utopia. For twelve long years "The Nomad" has wandered the desert plotting a path back home, and he's taking his trusty horse with him. But before "The Nomad" gets home he'll have to contend with "The Entrepreneur." "The Entrepreneur" is the son of the wealthiest man in the east - a recently murdered railroad baron. He's out to avenge his father's death and take over that lucrative Railroad Empire by force, but he doesn't realize that his trusted servant has recently stricken a deal with "The Criminal" a serpentine killer who stole "The Nomad's" horse and killed "The Entreprenuer's" father. Now, these four gunmen stand facing one another with their fingers on their triggers, their fates won't be known until the gun smoke clears. ~ Jason Buchanan, Rovi

Daniel Wooster
as The Nomad

Christopher Harrison
as The Entrepreneur

Jeff Campagna
as The Criminal

Mads Koudal
as The Sherpa

Colm Feore
as The Preacher

Aaron Harrison
as The Father

Romas Stanulis
as The Scout

Geoff Kolomayz
as The Barkeep

Critic Reviews for Six Reasons Why

There are no critic reviews yet for Six Reasons Why. Keep checking Rotten Tomatoes for updates!

Audience Reviews for Six Reasons Why