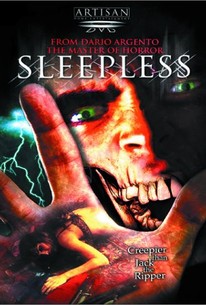 Director Dario Argento, best known for his stylishly bloody horror films, revisits the style and themes of his early directorial efforts in this tense crime thriller. A prostitute (Barbara Lerici) discovers one of her customers has a taste for much rougher sex than she's willing to give him; trying to sneak away from her john, she accidentally walks off with one of his scrapbooks, from which she discovers her client apparently committed a series of unsolved murders almost 20 years earlier. The john tracks down the prostitute and murders her to insure her silence; this awakens in him the desire to kill again, and soon he's once again leaving a bloody swath across Italy. Ulisse Moretti (Max Von Sydow), the police detective who investigated the earlier wave of killings, is brought out of retirement when clues link the new murders to those committed in the early '80s, and the aging cop finds his sometimes foggy memory jolted back to recognition by the growing number of bloody victims. Meanwhile, Giacomo (Stefano Dionisi), whose saw his mother being killed by the murderer as a boy, learns that the killer is back at work, and sets out to investigate the case on his own. Non Ho Sonno features an original musical score by the rock band Goblin, who also wrote music for a number of Argento's best-known films.