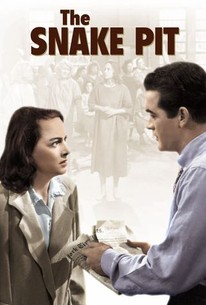 "A woman loses her mind and is confined to a mental institution." That's the usual TV-listing encapsulation of The Snake Pit -- and like most such encapsulations, it only scratches the film's surface. Olivia de Havilland stars as an outwardly normal young woman, married to loyal, kindly Mark Stevens. As de Havilland's behavior becomes more and more erratic, however, Stevens comes to the sad conclusion that she needs professional help. She is sent to an overcrowded state hospital for treatment -- a curious set-up, in that, while de Havilland is treated with compassion by soft-spoken psychiatrist Leo Genn, she is sorely abused by resentful matrons and profoundly disturbed patients. Throughout the film, she is threatened with being clapped into "the snake pit" -- an open room where the most severe cases are permitted to roam about and jabber incoherently -- if she doesn't realign her thinking. In retrospect, it seems that de Havilland's biggest "crime" is that she wants to do her own thinking, and that she isn't satisfied with merely being a loving wife. While this subtext may not have been intentional, it's worth noting that de Havilland escapes permanent confinement only when she agrees to march to everyone else's beat. Amazingly, Olivia de Havilland didn't win an Academy Award for her harrowing performance in The Snake Pit (the only Oscar won by the film was for sound recording). While some of the psychological verbiage in this adaptation of Mary Jane Ward's autobiographical novel seems antiquated and overly simplistic today, The Snake Pit was rightly hosannahed as a breakthrough film in 1948.

Victoria Albright
as Virginia at Age 2

Syd Saylor
as Visor
View All

Critic Reviews for The Snake Pit

Audience Reviews for The Snake Pit