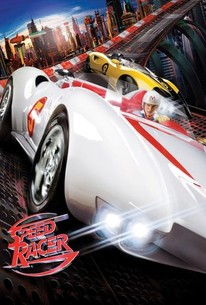 Overloaded with headache-inducing special effects, Speed Racer finds the Wachowskis focused on visual thrills at the expense of a coherent storyline.

The Matrix masterminds Andy and Larry Wachowski usher anime icon Tatsuo Yoshida's classic 1960s-era hit into the new millennium with this family-friendly story of a young racecar driver who takes on the mysterious Racer X in a custom-made, gadget-loaded speed machine named the Mach 5. Speed Racer (Emile Hirsch) is the kind of driver that every wheelman wishes he could be: a born winner whose unbeatable combination of aggression, instinct, and fearlessness always finds him crossing the checkered flag with a comfortable lead. In Speed Racer's mind, the only driver who could present him with any real challenge is his late brother -- the legendary Rex Racer. Rex died in a heated cross-country rally known as The Crucible many years ago, and now his younger sibling is driven to fulfill the legacy that Rex left behind. To this day, Speed Racer is fiercely loyal to family. It was Speed Racer's father, Pops Racer (John Goodman), who designed the unbeatable Mach 5, and even a lucrative offer from racing giants Royalton Industries isn't enough to get the young ace to break his family ties. Upon turning down Royalton's (Roger Allam) astronomical offer, Speed Racer makes the shocking discovery that the outcomes of the biggest races are being predetermined by a handful of powerful moguls who pad their profits by manipulating the drivers. Realizing that his career would be ruined if word of the fix gets out, Royalton vows that the Mach 5 will never make it to another finish line. Now, the only way for Speed Racer to save the family business and beat Royalton at his own game will be to win the very same race that claimed his brother's life so many years ago. In order to accomplish that formidable feat, however, Speed Racer will not only have to rely on his family and the aid of his longtime girlfriend, Trixie (Christina Ricci), but form a tenuous alliance with his longtime rival -- the mysterious Racer X (Matthew Fox)--as well.