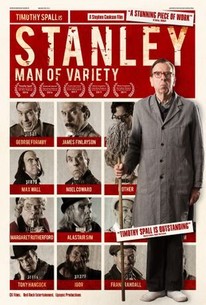 Stanley A Man Of Variety

Passionately convinced of his innocence, Stanley a forgotten and irrelevant nobody approaches his fifteenth year incarcerated in a Victorian psychiatric prison. Once a high risk facility, now in its last days before closure, Stanley seemingly the lone inmate of this now 'security relaxed' facility, cleans and polishes the grim gothic interior as he has done as a trustee for many years. The routine and metronomic drudgery of this task has always been underpinned with the ever increasing and painful desire to honour a solemn promise he made to himself to visit the grave of his dear departed only daughter on the 15th anniversary of her death. As this deadline approaches he finds his situation more and more unbearable. The one thing that assuages his grim situation is the 'trustee inmates' privilege of being allowed to watch and re-watch the video film section of his prized collection of show business memorabilia on an old television set in his cell. He accesses this via a token system granted to him each day by unseen guards which he feeds into a meter. This eclectic gallery of heart warming and eccentric performers has always acted as cherished friends even surrogate family to this lonely damaged Ignored Man. When this privilege is inexplicably withdrawn, he is so distressed it induces a physical and mental seizure and sets him off on a bizarre unsettling nightmarish journey through his life forcing him to face up to his unusual and damaging upbringing and denied culpability in his own guilt. His mental fragility and grasp on reality is thrown into kaleidoscopic chaos as the adored televisual companions begin to appear as a metamorphosed mixture of both them and him, Displaying there sinister and unsettling side, as well as the benign comical one, they take him on a journey to the unbearable truth and beyond.

Critic Reviews for Stanley A Man Of Variety

Audience Reviews for Stanley A Man Of Variety

There are no featured audience reviews for Stanley A Man Of Variety at this time.

Stanley A Man Of Variety Quotes