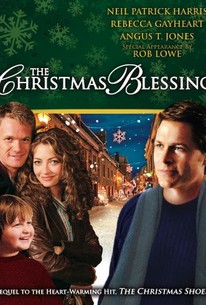 Made for television, The Christmas Blessing is a sequel to the earlier CBS holiday offering The Christmas Shoes, with Rob Lowe briefly reprising his portrayal of Robert Layton, a lawyer whose life was forever changed by a pair of "enchanted" shoes. This time around, the shoes have passed into the hands of Tucker Bennett (Shaun Johnston), the son of a seriously ill youngster named Charlie (Angus T. Jones. As fate would have it, Charlie is a student of schoolteacher Meghan (Rebecca Gayheart), who is endeavoring to set up a day-care center for single moms in the small town where she lives. At the same time in the same town, young medical resident Nathan Andrews (Neil Patrick Harris), his self-confidence shattered by the death of a teenage patient on the operating table, has returned home to work in the garage owned by his dad Jack (Shaun Johnston). In due course, Nathan meets Meghan and Charlie, and becomes intimately involved in the trials and tribulations of both, leading to an emotional climax in which Nathan must decide whether or not to summon his dormant medical skills to save Charlie's life. Singers NewSong and Blake Shelton appear as themselves, respectively performing the title song and the new composition "Nobody But Me". The Christmas Blessing originally aired on December 18, 2005.

Blake Shelton
as Himself
View All

Critic Reviews for The Christmas Blessing

There are no critic reviews yet for The Christmas Blessing. Keep checking Rotten Tomatoes for updates!

Audience Reviews for The Christmas Blessing