The Sky's on Fire 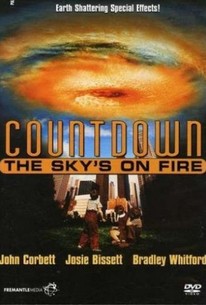 The Sky's on Fire

The Sky's on Fire Photos

Based on the novel Fatal Exposure, this cautionary made-for-TV thriller stars John Corbett as dedicated scientist and ecologist Evan Thorne. When he tries to warn the authorities that the earth's ozone layer has eroded to such an extent as to endanger all mankind, Thorne is laughed off as a nut case and his career and credibility are destroyed -- largely thanks to the skulduggery of his rival Dr. Schiffren (Tom Irwin), a scientist who has sold his soul to the industrial community. But when whales begin dying at an alarming rate, airplanes crash, corpses catch fire, wildlife goes insane, and deadly insects threaten to engulf Los Angeles, it would seem that Thorne wasn't just whistling Dixie. Even so, it takes the combined efforts of Thorne, his politician ex-wife, Jennifer (Josie Bissett), formerly cynical reporter John Morgan (Bradley Whitford), and gorgeous female scientist Elizabeth Sorel (Jo Anderson) to bring the authorities to their senses and expedite rescue-and-evacuation proceedings. By film's end, the future of humanity rests in Evan's ability to construct a bomb that will restore the balance of nature. A standard disaster flick disguised as a profound pro-environmental screed, The Sky's on Fire was reportedly produced for cable TV in 1998, but did not formally premiere until it was telecast by ABC on July 15, 2000.

Steve Poletti
as Secretary of Defense

Christopher May
as Traffic Controller

Will
as Med-Evac Pilot
View All

Critic Reviews for The Sky's on Fire

There are no critic reviews yet for The Sky's on Fire. Keep checking Rotten Tomatoes for updates!

Audience Reviews for The Sky's on Fire

There are no featured audience reviews for The Sky's on Fire at this time.

The Sky's on Fire Quotes