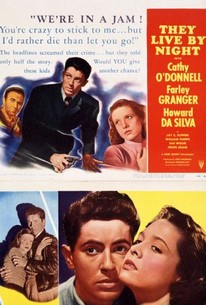 They Live by Night

"This boy...and this girl...were never properly introduced to the world we live in." With this superimposed opening title, director Nicholas Ray inaugurates his first feature, They Live by Night. Farley Granger and Cathy O'Donnell play a "Bonnie and Clyde"-type fugitive couple, who in trying to escape their past are hell-bent down the road to Doom. Despite their criminal activities, Bowie (Granger) and Keechie (O'Donnell) are hopelessly naïve, fabricating their own idyllic dream world as the authorities close in. The entrapment -- both actual and symbolic -- of the young misfit couple can now be seen as a precursor to the dilemma facing James Dean in Ray's 1955 film Rebel Without a Cause. A box-office disappointment upon its first release, They Live by Night has since gained stature as one of the most sensitive and least-predictable entries in the film noir genre. The film was based on a novel by Edward Anderson, and in 1974 was filmed by Robert Altman under its original title, Thieves Like Us.

Will Wright
as Mobley

Curt Conway
as Man in Tuxedo

Chester Jones
as Waiter in Nightclub

Will Lee
as Jeweler

Jane Allen
as People
View All

News & Interviews for They Live by Night

Critic Reviews for They Live by Night

Audience Reviews for They Live by Night

They Live by Night Quotes