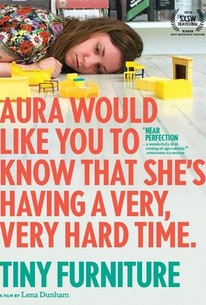 Agonizingly funny, Tiny Furniture marks an observant study of a failure to launch and an auspicious debut for writer-director Lena Dunham.

A recent college graduate keeps stumbling as she steps out into the real world in this independent comedy drama. Aura (Lena Dunham) has just graduated from a university in the Midwest, receiving a degree in film theory that even she seems to realize is essentially worthless. With no real prospects she returns home to her mother, Siri (Laurie Simmons), a successful photographer living in New York City. Aura's 17-year-old sister, Nadine (Grace Dunham), is about to graduate from high school and is choosing which college to attend in the fall; Aura is ostensibly back home to help Siri and Nadine during a hectic time, but they don't appear to particularly need or want her assistance. Aura befriends Jed (Alex Karpovsky), a minor celebrity thanks to his surreal YouTube videos, who insists he's in New York to take meetings for an upcoming TV project; he soon invites himself into Aura's bedroom as a semi-permanent guest, though he clearly has no interest in any sort of romantic or sexual relationship. With little else to do, Aura takes a job at a nearby restaurant and becomes smitten with Keith (David Call), one of the cooks; while he seems attracted to her, he also has a girlfriend and it isn't until they're both stoned one night that he makes his move in a rather unusual setting. Tiny Furniture was written and directed by Lena Dunham, who also plays Aura; Laurie Simmons and Grace Dunham are her mother and sister in real life as well as in the film, which was mostly shot in Simmons' actual apartment. The film was named Best Narrative Feature at the 2010 South by Southwest Film Festival. ~ Mark Deming, Rovi

Isen Hunter
as Jack
View All