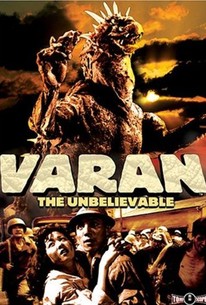 Better known as Varan the Unbelievable, this bug-eyed-monster opus was originally released in Japan in 1958 as Daikaju Baran. The English-language version prepared in 1962 was cut from 87 to 70 minutes, with scenes rearranged out of chronological order and new footage added featuring Myron Healey as an American military officer. Daikaju Baran is about a scientific party which discovers a prehistoric creature called Varan (opinions vary, but to some it looks like a flying, horned rodent). The monster naturally gravitates to Tokyo, wreaking plenty of havoc. Varan is destroyed by airborne explosives, which it voraciously -- and foolishly -- swallows. The American version grafts on a subplot about an experimental attempt to remove salt from sea water. The climax is virtually the only sequence that was left untouched in the American adaptation. Hardly in the same league as Rodan or Mothra, Varan the Unbelievable was a loser no matter where it was released (this "flying" beast never even gets off the ground in the U.S. prints). This is one sci-fier that looks far better in the 8-millimeter cutdown made available for home-movie trade than it does in its original form.

Critic Reviews for Varan the Unbelievable

Audience Reviews for Varan the Unbelievable

There are no featured audience reviews for Varan the Unbelievable at this time.