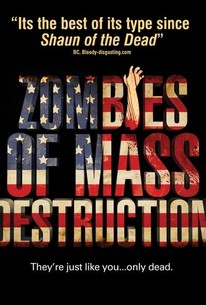 A small town wrestling with xenophobia is forced to open its collective mind in order to ward off a pack of brain-champing ghouls in this horror-comedy from writer and director Kevin Hamedani. It's 2003, America has invaded Iraq, and Port Gamble, Washington is a town in the Pacific Northwest that's fallen on hard times; fishing in the nearby harbor has dried up, local businesses are closing, and a lot of folks in town are looking for someone to blame for their troubles. Frida (Janette Armand), a college student of Middle Eastern descent, has come home for the summer to work in her dad's diner, and has to deal with narrow-minded locals who foolishly suspect she might be a terrorist. Meanwhile, Tom (Doug Fahl), who left Port Gamble years before, is wary about returning to visit his mother; Tom is gay, and has come home to tell his mom about his sexual orientation and introduce her to his boyfriend Lance (Cooper Hopkins). However, Frida's work behind the counter and Tom's revelation to his family take a back seat when a pack of hungry, flesh-eating zombies invade Port Gamble, and the most narrow-minded members of the community are forced to throw in their lot with some folks they're not sure they trust to fight off the undead mob. ZMD: Zombies of Mass Destruction was an official selection at the 2009 Seattle International Film Festival.