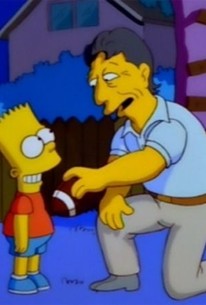 Pathologically cheerful born-again Christian Ned Flanders (voice of Harry Shearer) becomes coach of the Springfield Wildcats, a little league football team, and Bart Simpson (voice of Nancy Cartwright) joins the squad. True to form, Homer Simpson (voice of Dan Castellaneta) mercilessly heckles Flanders at every game even though he's guiding the team to a winning season, and Flanders quits in frustration. Homer takes over as coach, and cuts Bart from the team for his poor play; Marge (voice of Julie Kavner) urges Homer to give his son another chance, reminding him of his own dad's failure to encourage him as a boy. Homer reconsiders and not only brings Bart back but makes him quarterback. However, the team already has a star quarterback, noted bully Nelson Muntz (also voiced by Cartwright), while Bart has little talent for the position; the team's winning steak is soon a memory, and Bart can't convince his thick-headed father that being the quarterback is only earning him enemies. "Bart Star" also features voice cameos from gridiron stars Joe Namath and Roy Firestone as themselves, and Mike Judge as Hank Hill (from the series King Of The Hill); the episode first aired on November 9, 1997. 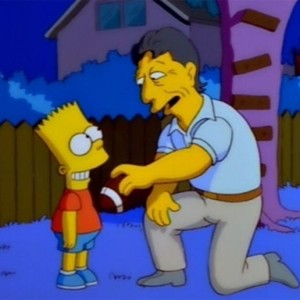