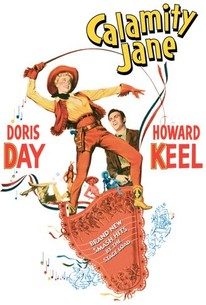 Doris Day looks no more like the real Calamity Jane than you or I do, but this 1953 film is intended as a lighthearted musical, not a historical tract. As portrayed by the freckled Ms. Day, Jane is a rootin', tootin' shootin' hoyden in the western town of Deadwood. When she isn't tearing up the town, Jane spends her time cussing out Wild Bill Hickok (Howard Keel). The plot gets under way when Jane promises the citizens of Deadwood that she can persuade classy Chicago stage star Adelaide Adams (Gale Robbins) to perform at the local opry house. Through a case of mistaken identity, Jane brings Adelaide's maid Katie (Allyn Ann McLerie) back to town. Katie proves to be a success all the same, and out of gratitude promises to make a "lady" out of Jane, who is sweet on handsome Lt. Gilmartin (Philip Carey). When the lieutenant chooses Katie over Jane, our heroine is heartbroken--until she realizes that she has loved Wild Bill Hickok all along, and that the feeling is mutual so far as Hickok is concerned. The peppy musical score by Sammy Fain and Paul Francis Webster includes the Oscar-winning Secret Love, which became a million-selling hit for Doris Day.