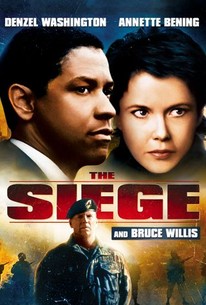 Edward Zwick directed this action thriller about Islamic militants unleashing terrorism in New York City. As FBI Terrorism Task Force-chief Anthony Hubbard (Denzel Washington) investigates, a false-alarm bomb threat is followed by a legit bomb, with many killed when a Brooklyn bus explodes. Agents track a suspect through Brooklyn, while Hub teams with Middle East expert and NSA operative Elise Kraft (Annette Bening). After the FBI wipes out three Arabs in a Brooklyn apartment, an explosion in a Broadway theater is followed by attacks on a school and FBI headquarters. When the President declares martial law, neo-fascist Army General William Devereaux (Bruce Willis) swings into action, deploying tanks through Brooklyn, capturing Arab-American males, and herding them into an open-air stadium detention camp. Hub's Arab-American FBI associate Frank Haddad (Tony Shalhoub) is disgusted and quits when his son becomes one of the Arab detainees. With the Army out of control, the power-crazed Devereaux devises plans for torture and murder, turning his attention to Hub and Elise. President Bill Clinton is seen denouncing terrorists in TV clips. ~ Bhob Stewart, Rovi

Chip Zien
as Chief of Staff

Will Lyman
as FBI Director

John Henry Cox
as Speaker of the House

Matt Servitto
as Journalist No. 1

Jourdan Fremin
as Journalist No. 2

Critic Reviews for The Siege

Audience Reviews for The Siege