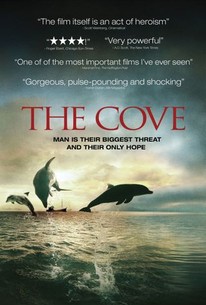 Though decidedly one-sided, The Cove is an impeccably crafted, suspenseful expose of the covert slaughter of dolphins in Japan.

In the 1960s, Richard O'Barry enjoyed a lucrative career as a specialized animal trainer; he captured the five dolphins that were used in the popular television series Flipper, and taught them the tricks and special commands they used on the show. Four decades later, O'Barry has renounced his former life as a trainer and become an animal rights activist, speaking out against the hunting of aquatic mammals and keeping them in captivity. O'Barry is not welcome in Taiji, a town along the Japanese coast where hunting dolphins is a major part of the local economy, but he and a group of activist filmmakers made their way into the city as well as the carefully guarded harbor in hopes of documenting the abuse of dolphins by fisherman and the poisoning of the waters that has taken a toll on the marine ecology. O'Barry and his colleagues captured some beautiful underwater footage as well as shocking images of how the town's fisherman have sullied the dolphins and their habitat, and director Louie Psihoyos has used this material as the basis for the documentary The Cove, which received its world premiere at the 2009 Sundance Film Festival. ~ Mark Deming, Rovi

News & Interviews for The Cove

Critic Reviews for The Cove

Audience Reviews for The Cove