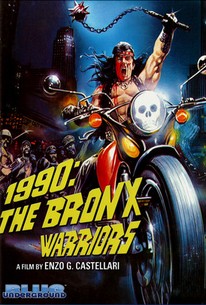 One of many post-apocalyptic science-fiction films which poured out of Europe in the wake of George Miller's Mad Max, this film stars Stefania Girolami as Anna, who runs away from her wealthy but obnoxious family into the surrealistic biker gangland of the Bronx. There, she meets Trash (Marco de Gregorio), part of a gang called The Riders, and soon falls in love with him. Problems arise when Anna's father (Enio Girolami), president of the evil Manhattan Corporation, sends in a psychopath named Hammer (Vic Morrow) to stir up trouble among the rival gangs, including a black club led by Ogre (Fred Williamson) and a rollerskating group led by Golem (Luigi Montefiori). Castellari's direction is surprisingly stylish and exciting, but all of the hyper-macho posturing eventually grows tiresome for anyone over fifteen. Still, undemanding viewers will have a good time, as the action keeps coming fast and furious, laced with suitably hardbitten dialogue by director Enzo G. Castellari, Elisa Livia Briganti and Dardano Sacchetti. A minor classic of testosterone cinema, followed by several sequels starting with Fuga dal Bronx (1983). ~ Robert Firsching, Rovi

Fred Williamson
as The Ogre

There are no critic reviews yet for 1990: I guerrieri del Bronx (1990: Bronx Warriors). Keep checking Rotten Tomatoes for updates!