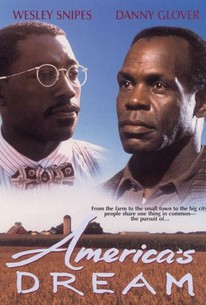 Made especially for the HBO cable network, this well-wrought feature is comprised of three short stories by three noted black American authors, each of which is directed by a respected black director. The first tale, Long Black Song, was written by Richard Wright and is set in Alabama, 1938. It centers on a bored farmer's wife (Tina Lifford) who dallies with a handsome white peddler (Tate Donovan) while her husband (Danny Glover) takes the crops to market. The second story, The Boy Who Painted Christ Black, was written by John Henrik Clarke and takes place in Georgia ten years after the first vignette. It centers on a community-wide conflict created when a student attending a segregated high school paints a portrait of a black Jesus and submits it to a state-wide art contest designed to foster ethnic pride. At first, principal George Du Vaul (Wesley Snipes) is taken aback by the picture, but after much contemplation, he decides to put his career on the line and enter it. Maya Angelou penned the third story, The Reunion. It takes place in Chicago, 1958, and centers on a jazz singer (Lorraine Toussaint) who finds herself reliving painful childhood memories of growing up a servant's daughter in a wealthy white home.

There are no critic reviews yet for America's Dream. Keep checking Rotten Tomatoes for updates!

There are no featured audience reviews for America's Dream at this time.