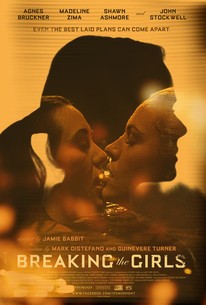 In a thriller reminiscent of the best of Alfred Hitchcock, Madeline Zima and Agnes Bruckner star as best friends who share everything until one of them reveals a twisted sense of loyalty. Sara is an ambitious, beautiful twenty-something working her way through law school. Her hard work and stellar academic record has paid off with a coveted scholarship. Her kind spirit and generous manner attracts one of the popular guys at school, Eric. His jealous girlfriend, Brooke, who comes from a wealthy, privileged background, decides angrily to publicly humiliate Sara at the bar where Sara works. Watching from the bar is Alex, gorgeous and even more privileged even than Brooke. Alex takes Sara under her wing to comfort her. As a way of getting back at Brooke, Alex encourages Sara to continue her flirtation with Eric. For a little while, it's great fun. But it backfires - Brooke's father is the head of the scholarship board, and Brooke convinces him to revoke Sara's scholarship. Then Brooke gets Sara fired from her job. Devastated, Sara turns to Alex. As the two girls become closer, a sexual tension develops between them. As they discuss what to do about Brooke, Alex tells Sara about her own stepmother, a woman she despises. Alex casually suggests to Sara that they should make a murder pact. Alex would kill Brooke for Sara, and Sara would repay by killing Alex's stepmother. All their problems would be solved. Sara shrugs off the suggestion as a joke. The next day, Brooke is found dead, and Alex appears at Sara's door, reminding her of the pact. Sara realizes she has been used and that Alex has set her up to take the rap for Brooke's murder. Out of her elements and emotionally distraught over the betrayal, Sara knows that if she wants to survive, she is going to have to fight back with an equally cunning and deadly plan of her own. (c) IFC

News & Interviews for Breaking The Girls

Critics Consensus: The Wolverine Is Pretty Sharp
View All

Critic Reviews for Breaking The Girls

Audience Reviews for Breaking The Girls