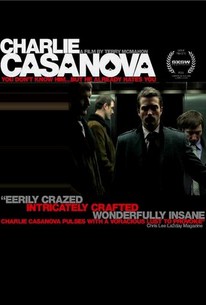 A charming sociopath's life begins to unravel in this independent drama from Irish filmmaker Terry McMahon. Charlie (Emmett J. Scanlan) is a successful and well-to-do businessman who is attending a weekend-long conference with his wife, three of his best friends and their spouses. What most of them don't know is Charlie's life is a house of cards; his business is falling apart, his investments are going bust, his marriage is on its last legs, he's been having an affair with a friend's wife, and he's using credit cards to fend off his inevitable financial collapse. En route to the conference, Charlie runs over a working-class woman with his car; he decides to let the draw of a card determine if he calls the police or simply moves on, and over the rest of the weekend, he uses a deck of cards to make his choices. As chance takes the place of Charlie's stunted conscience, his actions and statements become increasingly ugly and abusive while his arrogance, his sense of privilege and his contempt for nearly everyone around him become obvious. Writer and director McMahon raised the financing for Charlie Casanova and recruited most of his cast and crew through postings on Facebook, with the filmmaker claiming it was the first feature film conceived and launched though the use of the social networking site. ~ Mark Deming, Rovi

There are no featured audience reviews for Charlie Casanova at this time.