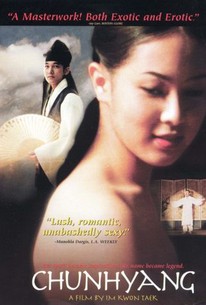 Chunhyang brings a classic love story to life with a period romance whose savory visuals are enhanced by a sincerity that transcends folktale formula.

Renowned Korean filmmaker Im Kwon Taek offers his own unique take on a classic romantic fable with this 13th century tale of a stunningly beautiful young woman torn between the man she loves and the governor she's obligated to marry. The film uses the framing device of a present-day narrator who, accompanied by a drummer, sings the story of Chunhyang in front of a responsive audience. The film flashes back and forth between the singer's presentation and scenes of Mongryong (Cho Seung Woo), a young nobleman who falls captive to the beauty of the commoner Chunhyang (Yi Hyo Jeong). They profess their undying love to each other and elope, soon after which, Mongryong is forced to accompany his father to Seoul for three years. In the interim, a tyrant named Byun (Lee Jung Hun) comes to power in Chunhyang's province and demands that the beauty marry him. She refuses, and Byun schedules her for execution -- just as Mongryong returns to the province to reclaim his true love. Chunhyang made its North American Premiere at the 2000 Toronto International Film Festival.

Yoon Keun Mo
as Lord of Goksung
View All