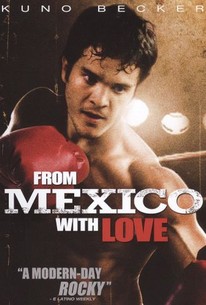 From Mexico with Love

From Mexico with Love Photos

Jimmy Nickerson, fight coordinator on such films as Raging Bull and Rocky, takes the directorial reins for this tale of a self-destructive amateur boxer seeking to follow in his father's footsteps by making a name for himself in the ring. Hector Villa (Kuno Becker) may have the spirit of a winner, but his better judgment is consistently clouded by his anger. Though Hector picks fruit on the Texas ranch of Big Al Stevens during the daylight hours, nightfall finds the migrant laborer earning more than a day's pay by fighting for cash in local bars and converted barns. When Hector's mother, Rosa, falls ill, her loyal son takes as many fights as possible in order to pay for her expensive heart medication. But Big Al's son Robert is the undefeated champ of the local boxing scene, and when Big Al learns that Hector may be capable of delivering the blow that could dethrone his son, he has his henchmen beat Hector and leave him for dead in the Mexican desert. Now homeless and penniless on the desolate streets of Mexico, Hector is forced to literally fight for his life. When Hector learns that his mother has died, he seeks out local fighting legend Billy Jenkins in hopes that the grizzled former boxer and trainer will help him develop the skills needed to settle the score with Big Al and Robert. The man who once served as Robert's coach before learning that the unscrupulous young fighter was "on the juice," Billy knows that there is no way Hector could beat an opponent with such an unfair advantage. Upon learning that Big Al has accepted Hector's challenge to take on his son Robert thanks to the persuasive efforts of the migrant community, Hector and Billy begin training for the fight that could make or break Hector's future career in the ring.

Gene Lebell
as Referee
View All

Critic Reviews for From Mexico with Love

Audience Reviews for From Mexico with Love

From Mexico with Love Quotes