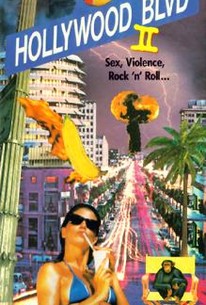 Roger Corman's production company does it again with this fast-paced, funny send-up of grade "B" movie-making. Like the first Hollywood Boulevard, this story is set at the kitschiest production company in Tinsel Town, Miracle Pictures. The trouble begins during the filming of Barbarian Goddesses of the Amazon It seems someone has been bumping off the studio's buxom starlets. Poor studio head Max Miranda is frantic to find new ones. When toothsome Candy Chandler slinks in, someone mistakes her for an extra and rushes her into the set for Barbarian, where Max becomes instantly enamored and begins promising her that she will be the studio's brightest young star, something that doesn't set well with jealous diva Mary Randolph. Corman fans will again be delighted by the many clips from earlier New World films and by the many inside jokes.

Jim Wynorski
as Man Who does Lunch

John Bloom
as Himself

Herb Stewart
as Himself

Rod Luring
as Who Are You

William Shaw
as Man with Raft

Mike Marr
as Man with Raft

Anne-Marie Bridgnell
as Girl with Fan

Manuel Lubin
as Men with Skull

Casildo Munoz
as Men with Skull

There are no critic reviews yet for Hollywood Boulevard II. Keep checking Rotten Tomatoes for updates!

There are no featured audience reviews for Hollywood Boulevard II at this time.