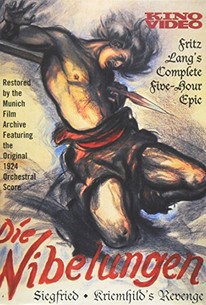 The second portion of German director Fritz Lang's two-part silent epic Die Nibelungen (part one was 1924's Siegfried), Kriemhild's Revenge opens with mythical heroine Kriemhild (Margarethe Schoen) vowing to avenge the murder of her husband Siegfried. Realizing that her brother, King Gunther (Theodor Loos), is too weak-willed to bring the culprit--her villainous half-brother Hagen Tronje (Hans Adalbert Von Schlettow)--to justice, Kriemhild plots her own private vengeance. Later, Kriemhild is obliged to participate in a "marriage of state" to Burgundian King Etzel (Rudolph Klein-Rogge, who later played Rottwang in Lang's Metropolis). At the wedding festival, she takes the Burgundian revellers hostage, promising to free them if they'll kill Hagen Tronje, who is one of the guests. Their refusal leads to the film's climactic bloodfest, during which Kriemhild metes out justice with Siegfried's magic sword. An astonishingly elaborate and expensive effort (much more so than any American film of 1924), Kriemhild's Revenge is admittedly rough sledding until its lively finale, especially when shown in its original 140 minute length (cartoon director Chuck Jones managed to compact the same basic story into his 6-minute masterpiece What's Opera, Doc?) ~ Hal Erickson, Rovi

Grete Berger
as A Hun