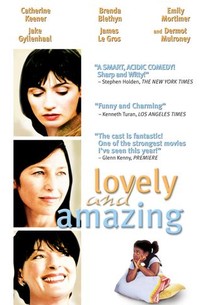 The bitingly truthful Lovely & Amazing is a smart and perceptive female character study.

Jane Marks is the matriarch of a confused trio of daughters -- a heady brew of vanity, insecurity and humor -- that seem to have nothing in common. Former homecoming queen Michelle, the eldest daughter, is in a loveless marriage with a spouse who does not appreciate her decidedly obscure artistic endeavors. Younger sister Elizabeth, a self-doubting actress whose career is beginning to take off, compulsively takes home stray dogs, saving them whether or not they need to be saved. Only the youngest sister, Annie, an adopted African American eight-year-old, seems emotionally equipped to stand a chance at rising above the family's legacy. But on the threshold of what already promises to be a confusing adolescence, Annie has developed a preoccupation with her appearance - natural enough for a pre-teen - but given her adoptive family's history, quite possibly a hint of what's to come for the newest member of the Mark's family. Each of the women seeks redemption in her own haphazard way, but whatever salvation they find is illusory and short-lived. When complications from cosmetic surgery threaten Jane's well being, the family of comically self-absorbed women must quickly find room for each other in their lives to offer comfort and strength.

Nate Richert
as Other Teenage Boy