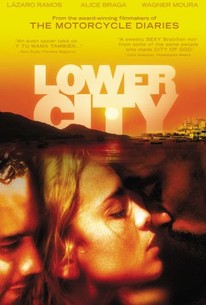 This familiar story of a tension-fraught love triangle wavers between brutality and steamy sex.

A simple cruise turns into a jealous battle for the affections of a sultry prostitute as the co-owners of a small cargo boat make their way down the Brazilian coastline in director Sergio Machado's stylish and sultry erotic drama. Deco (Lazaro Ramos) and Naldinho (Wagner Moura) are best friends who make their living by renting out their modest cargo boat. Approached by 20-year-old prostitute Karinna (Alice Braga) for a ride down the coast, the trio sets out into the waters with both Deco and Naldinho employing her professional services throughout the course of the journey. After a fateful knife fight at a Cachoeira cockfight leaves Naldinho struggling for his life, Deco finds himself slowly falling for Karinna as his badly wounded friend battles back from the brink of death. Though Karinna's relationship with Deco becomes increasingly intimate during Naldinho's convalescence, it doesn't take long for the kindly prostitute to realize that Deco isn't the only one with intentions of claiming her as his own. ~ Jason Buchanan, Rovi

Tais Wagner
as Stripper No.1

Alessandra
as Stripper No. 2

Guiga Scott
as Narrator
View All