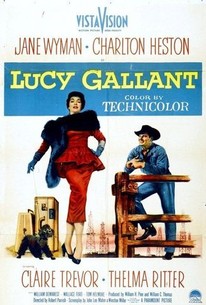 An unusually matronly Jane Wyman plays the title character in Lucy Gallant. Adapted from a novel by Margaret Cousins, the story concerns the efforts by Lucy Gallant to make the wide-open spaces of Texas a mecca for High Fashion. Jilted at the altar, Lucy retreats to a booming oil town, where she courageously opens up a gown shop. Rancher Casey Cole (Charlton Heston) is disdainful of "working women", but he never hides the fact that he's madly in love with Lucy. As the film progresses, Lucy nearly loses her business due to financial reverses, but Casey secretly pumps money into her operation, all the while declaring publicly that she's doomed to failure. Lucy's gowns were actually designed by Edith Head, who makes an appearance towards the end of the film, as does the then-governor of Texas, Allan Shivers. Lucy Gallant was the last of the incredibly successful Pine-Thomas productions for Paramount Pictures; there might have been more had not William H. Pine died shortly after completing the film.

Allan Shivers
as Himself

Edith Head
as Herself

Robert B. Williams
as Townsman

Elizabeth Cloud-Miller
as (uncredited)
View All

There are no critic reviews yet for Lucy Gallant. Keep checking Rotten Tomatoes for updates!

There are no featured audience reviews for Lucy Gallant at this time.