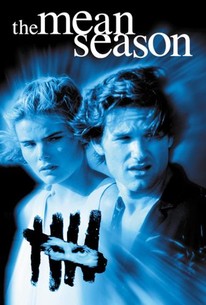 2:51
The Mean Season: Official Clip - A Tape for Malcolm

1:57
The Mean Season: Official Clip - Nothing Is Important

2:57
The Mean Season: Official Clip - Leaving is Just a Formality

1:30
The Mean Season: Official Clip - News Gets Made Somewhere Else

Nothing in The Mean Season is quite as powerful as its opening: a languid shot of a young girl, wandering with a seeming carefree air down the beach, suddenly turning to stare in tearful terror at the man she knows is about to kill her. The plot concerns the search for the serial murderer who was "introduced" in the opening. Miami journalist Malcolm Anderson (Kurt Russell) writes a newspaper series on the killings and as a result is the recipient of phone calls from the killer Alan Delour (Richard Jordan). Delour likes Anderson's work and promises to call in with exclusive accounts of his upcoming murders -- though he doesn't go so far as to tell Anderson where he'll strike next. The story becomes bigger than both Anderson and Delour, with the latter growing jealous of Anderson's sudden celebrity and with both men using one another to advance themselves. The inevitable showdown takes place during a convincingly staged hurricane, with Anderson's lady friend (Mariel Hemingway) an unwilling pawn between the two ego-driven men. The Mean Season was adapted by Leon Piedmont from John Katzenbach's novel In the Heat of the Summer.

Marshall B. Gage
as SWAT Commander

John Palmer
as Himself

Joshua Segal
as Schoolboy
View All

Critic Reviews for The Mean Season

Audience Reviews for The Mean Season