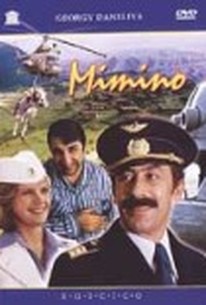 A much beloved comedy, Mimino tells the story of a Soviet Georgian helicopter pilot who is called Mimino (Vakhtang Kikabidze), which means "falcon" in that language. He is ambitious to become an international airline pilot and goes to Moscow and, with the help of an old friend, tries to get a job as an international pilot. In his Moscow hotel, he meets Suren, an Armenian, and despite the supposed historical antipathy of Georgians and Armenians, they become friends. They have both pretended to be participants in a seminar on endocrinology in order to get rooms at the hotel where the seminar is being held. He has a lot of wild adventures with Suren, and on his own. Much of the comedy pits ordinary people such as Mimino, who is from the countryside, against the haughty sophisticates of Moscow. Popular Georgian singer Vakhtang Kikabidze, who performs the title role, sang a song within the film which became a Soviet hit. This film won the Grand Prize from the 1978 Moscow International Film Festival, the State Prize of the USSR, and also a prize from the All-Union Film Festival. ~ Clarke Fountain, Rovi

There are no critic reviews yet for Mimino. Keep checking Rotten Tomatoes for updates!

There are no featured audience reviews for Mimino at this time.