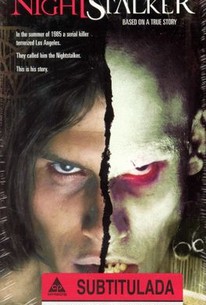 Richard Ramirez was a deeply disturbed Californian who worshiped Satan, believed he was in direct contact with demons, and was fascinated with the darker undercurrents of heavy metal music. Ramirez was also a serial killer; known as "The Night Stalker," Ramirez killed 19 people in Los Angeles and San Francisco between 1984 and 1985, putting both cities in the grip of fear until he was captured by authorities and eventually sentenced to life in prison. Director and screenwriter Chris Fisher made his feature debut with this dramatized account of Ramirez (played by Bret Roberts) and his crimes, as well as the detective who finally brings him to justice. As Ramirez stalks his prey under cover of darkness, Gabriella Martinez (Roselyn Sanchez), a female Los Angeles Police Department officer who has just been promoted to detective, is put on the case, and as she gets closer and closer to uncovering the identity of the killer, she runs a greater risk of becoming his next victim. Nightstalker was produced in part by character actor Danny Trejo, who also appears as Martinez's former partner on the LAPD.

There are no critic reviews yet for Nightstalker. Keep checking Rotten Tomatoes for updates!