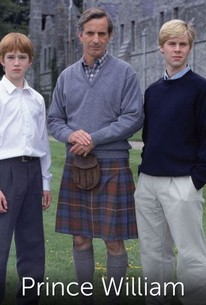 Jordan Frieda, the son of British pop singer Lulu, plays the title role in this made-for-TV biopic. The film covers three years in the life of the young and handsome Prince of Wales, from the death of his mother Princess Diana in 1997, to his entry into St. Andrew's College in 2000. The young Prince's predilection for irreverence and mischief is duly noted, as is the pathos attending his strained relationship with his father Prince Charles (Martin Turner) and grandmother Queen Elizabeth (Rosemary Leach), and his inability to maintain any sort of private life (he has only to kiss a girl on date for every photographer on earth to crawl out of the bushes). The bulk of the film chronicles William's efforts to keep his mother's memory alive, and to come to terms with his "second mother", the controversial Camilla Parker Bowles (Carolyn Pickes). Because of its mildly anti-Royal sentiments, as well as a melodramatic subplot intimating that "sinister forces" intended to do William harm, the film garndered a huge amount of attention from both Buckingham Palace (who refused to give official sanction to the production) and the British tabloids. Filmed in Ireland, Prince William made its ABC network debut on September 29, 2002. ~ Hal Erickson, Rovi

James A. Watson Jr.
as Squiggy

There are no featured audience reviews for Prince William at this time.