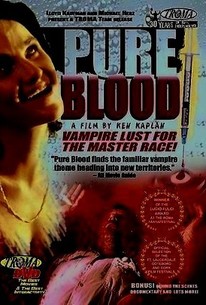 A gory post-apartheid horror film concerning the resurrection of a dead general amidst the backdrop of modern South Africa, writer/director Kenneth Kaplan's longtime-in-the-making directorial debut finds the familiar vampire theme heading into new territories. As the last South African born with untainted Aryan blood, Fanus (Carl Beukes) unknowingly holds the key to giving life to the dead. As his mother, Gertrude (Aletta Bezuidenhout), and the nefarious Eugene (Danny Keogh) plot to utilize the potent plasma in reviving Fanus' super-racist father, the dysfunctional family's dark past comes to the forefront and the red stuff begins to flow in abundance. Utilizing the gruesome influence of Herschell Gordon Lewis combined with the dark social satire of George A. Romero, Kaplan's dark commentary on the human condition in South Africa is intended to deconstruct the mindset that let apartheid flourish while providing audiences with release through use of dark humor. ~ Jason Buchanan, Rovi

There are no critic reviews yet for Pure Blood. Keep checking Rotten Tomatoes for updates!

There are no featured audience reviews for Pure Blood at this time.