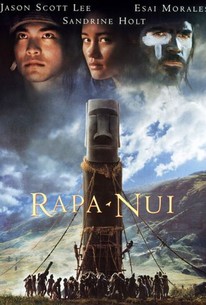 This adventure-filled epic speculates upon the original inhabitants of Easter Island who are best known for their mysterious moai, the huge stone heads that dot the island. The story begins 40 years before the Dutch "discovered" the island on Easter Sunday, 1722. The island dwellers were divided into two clans, the ruling Long Ear clan and the subordinate Short Ears who became slaves to the rulers. The story centers around the annual island contest which determines the next ruler. Contestants must scale down a cliff, swim through shark-filled waters to the next island, get eggs from a sea bird's nest, swim back, and climb up the cliff with the egg intact. The same Long Ear tribe has won for the last 20 years; their leader Ariki-mau is determined to win again with his grandson Noro. Tupa is in love with a Short Ear Ramana, but she is also loved by Make, another Short Ear. It is taboo for the two clans to intermarry, but Tupa's grandfather makes an exception if Tupa wins the race. The Short Ears must create a moai in short order. They rebel. Make gets to race; Ramana is the prize. In the end, civil war erupts.

Henry Vaeoso
as Half & Half

There are no critic reviews yet for Rapa Nui. Keep checking Rotten Tomatoes for updates!

There are no featured audience reviews for Rapa Nui at this time.