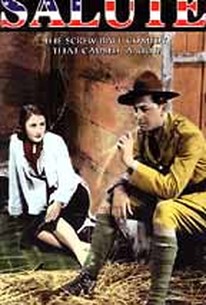 Anti-Communist politics and screwball romance make strange bedfellows in this comic tale that plays like a cross between the previous year's It Happened One Night (1934) and a less-sober version of a later generation's The Way We Were (1973). Barbara Stanwyck stars as Drue Van Allen, a college student whose father (Purnell Pratt) is a general in the U.S. Army. Dad is less than enthused with Drue's new beau Arner (Hardie Albright) because the lad is a propaganda-spouting Communist. The general would rather see Drue with Jeff (Robert Young), a handsome, all-American soldier who, despite the senior officer's endorsement, has chronic run-ins with authority and is about to go AWOL. When Drue and Jeff end up in a stolen trailer bound for Mexico, they get to know each other better, and General Van Allen sees a prime opportunity to get his daughter away from the red menace for keeps. Red Salute (1935) has also been exhibited under the titles Runaway Daughter and Her Enlisted Man.

Dave O'Brien
as Students at Rally

William Moore
as Student at Rally

Fred Kohler Jr.
as Student at Rally
View All