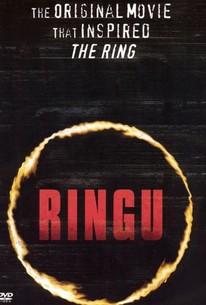 Ringu combines supernatural elements with anxieties about modern technology in a truly frightening and unnerving way.

In this psychological horror story from Japan, a legend circulates among teenagers that if one watches a certain video at a certain time of the night, the telephone will ring right afterward, and one week later, you will die. When Masami (Hitomi Sato) tells her friend Imako this story, she scoffs -- but a week later, Imako dies. Imako's aunt, a television journalist named Reiko (Nanako Matsushima), hears that not long before she died, Imako was watching a strange video with her friends -- all of whom have turned up dead. Reiko tracks down a copy of the video, and as she watches its strange, spectral images, the telephone begins to ring....The next morning, Reiko begins a desperate search to solve the mystery of the video, convinced she has only seven days to live; assisting her is Ryuji (Hiroyuki Sanada), a mathematics expert and her former husband. Ringu was a box-office success in its native Japan, and a surprise blockbuster in Hong Kong, where it became the biggest grossing film of the first half of 1999. ~ Mark Deming, Rovi

Kiyoshi Risho
as Omiya the Cameraman

Toshihiko Takeda
as Yamamura as a Teenager

Chihiro Shirai
as Sadako as a Young Girl