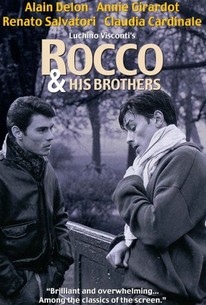 Rocco and His Brothers (Rocco e i suoi fratelli)

Luchino Visconti's operatic masterpiece tells the story of the Parondis, a poor family from a village in southern Italy who come to Milan seeking a better life. Following the death of her husband, proud Rosaria (Katina Paxinou) picks up stakes and moves to the city with four of her sons: Simone (Renato Salvatori), Rocco (Alain Delon), Ciro (Max Cartier), and Luca (Rocco Vidolazzi). Awaiting them in Milan is her oldest son, Vincenzo (Spiros Focas), who himself is preoccupied with his impending nuptials to the beautiful Ginetta (Claudia Cardinale). Divided into chapters focused loosely on each brother, the movie chronicles the Parondis' struggle to get by, as the brothers take odd jobs and the family endures life in a cramped tenement. Much of the movie's second half deals largely with Simone and Rocco. The loutish Simone eventually finds success as a boxer, and the family soon moves to a better neighborhood. Meanwhile, Rocco gets drafted by the military, and becomes a successful boxer himself upon his return. Complications arise when Nadia (Annie Girardot), a prostitute, enters their lives. Simone falls in love with Nadia first; however, Rocco eventually becomes the object of her affection. Simone's obsession with Nadia and his rapidly deteriorating behavior ultimately threaten to bring the family to ruin, even as the saintly Rocco tries to save his brother. At the peak of Rocco's success, Simone commits a crime that cruelly dashes Rocco's hopes of keeping the family together.

Enzo Fiermonte
as Boxer
View All

Rocco and His Brothers (Rocco e i suoi fratelli) Quotes