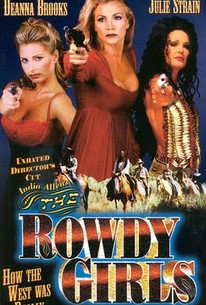 India Allen, Playboy's 1988 Playmate of the Year, wrote and produced this sexy western romp. In 1886, Velvet (Shannon Tweed), a prostitute who has stumbled along some very dangerous information, and Sara (Deanna Brooks), a woman fleeing a man she has chosen not to marry, are both riding west on a stagecoach headed to San Francisco. The stage is hijacked en route by outlaw leader Poke (Daniel Murray), and soon Velvet and Sara find themselves at the mercy of Poke's gang, until they join forces with one of his gunslingers -- hard-as-nails cowgirl Mick (Julie Strain). Like India Allen, Shannon Tweed and Deanna Brooks both first gained fame as featured models in Playboy magazine. Julie Strain, on the other hand, kick-started her career with a photo spread in rival men's magazine Penthouse. The Rowdy Girls was released in two versions, one rated R, and another (with more nudity) which was distributed without an MPAA rating.

Julie Strain
as Mick
View All

There are no critic reviews yet for Rowdy Girls. Keep checking Rotten Tomatoes for updates!

There are no featured audience reviews for Rowdy Girls at this time.