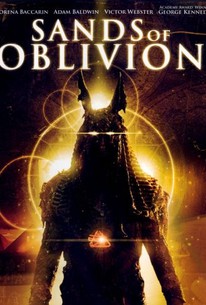 In 1923, after acclaimed director Cecil B. de Mille completed the first version of his Biblical epic The Ten Commandments, an odd event occurred that generated a wealth of speculation and mystery: de Mille - having shot on multi-million dollar sets to rival nearly anything in prior movie history - promptly traveled to the sand dunes on the California coast and buried his sets there. For nearly a century, the reasons belying this odd series of actions remained clouded in obscurity. Now, with his documentary Sands of Oblivion, filmmaker David Flores finally uncovers the truth: De Mille, it seems, acquired the majority of artifacts for the film on actual Middle Eastern burial grounds. The items included an odd prayer bowl, allegedly cursed with the spirit of Im-La-Ra - the god of chaos and fear. Certainly few other explanations could account for the devastating experiences had by the workers on the film crew - experiences that included devastating maniacal visions, sudden insanity and loss of control that led to murder. With Sands of Oblivion, Flores travels to the site of the initial burial and excavates the items once again, with a team of archaeologists, to investigate the truth behind these legendary events.

Charles Lister
as Buford
View All

Critic Reviews for Sands of Oblivion

There are no critic reviews yet for Sands of Oblivion. Keep checking Rotten Tomatoes for updates!

Audience Reviews for Sands of Oblivion