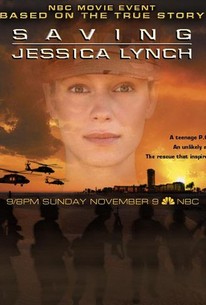 NBC wasted precious little time in offering up a TV-movie adaptation of one of the first truly uplifting stories of the Iraq War. Saving Jessica Lynch stars Laura Regan as the title character, a 19-year-old army private with the 507th Ordinance Maintence Company. On March 23, 2003, Jessica is captured by Iraqi insurgents after the rest of her platoon is wiped out in a roadside bombing not far from Al Nasiryah. Curiously, Jessica doesn't get all that much screen time: The primary focus is on the rescue efforts mounted by a group of Army Rangers and Navy SEALS, with special emphasis bestowed upon Mohammed Al-Raheif (Nicholas Guilak), the courageous Iraqi man who shielded the captured woman from harm while she lay wounded in an enemy hospital (it should surprise no one that the script is based on Al-Raheif's own book, Because Each Life Is Precious. An inordinate amount of poetic license is taken with the events surrounding Jessica's rescue, with a plethora of ridiculous coincidences and serial-like thrills and chills thrown in to pep up the story. To her credit, the real Jessica Lynch herself neither authorized nor promoted the film, which first aired November 9, 2003.

Adnan Bahar
as Kaldia
View All

There are no featured audience reviews for Saving Jessica Lynch at this time.