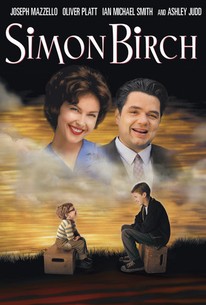 Overly mushy; tries too hard to pull at the heart-strings.

From the day he was born, Simon Birch (Ian Smith) was different. He was no bigger than a baby bird, and the doctors predicted that he'd never last the night. But he did. Then they said he'd never last the week. But he did. Weeks turned into months and months into years, until Simon grew into a boy with an unwavering belief that God had a special plan for him -- that He had made him that small for a reason. Simon's only friend, Joe (Joe Mazello), is on a quest of his own. His young and beautiful mother, Rebecca (Ashley Judd), has kept the identity of his father a secret. With dreams of finding his real father one day, Joe is less than thrilled with Ben (Oliver Platt), the new man in his mother's life. But things take a sudden and tragic turn when Simon, in a Little League baseball game, hits a foul ball that strikes and kills Rebecca, sending her to her grave along with her secret. Simon's destiny and Joe's quest for his father become intertwined in the end, when Simon becomes the hero he was destined to be and in the process helps Joe solve the mystery of his father.

Tommy Dorrian
as Teammate No. 1

Justin Marangoni
as Teammate No. 2

David Chapman
as Old Man No. 2