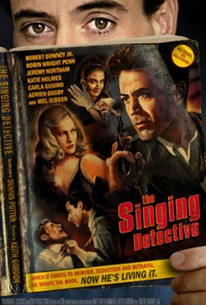 Delightful performance from Robert Downey Jr. can't save The Singing Detective's transition from TV to the big screen.

Dan Dark gives new meaning to the term "scars of childhood." A hack writer of detective stories, he has suffered from psoriatic arthropathy, a crippling disease of the skin and bones, from the time he was eight-years-old. His latest and worst outbreak has landed him in the hospital where he deliriously tries to figure out who he is and how he got to this terrible place in his life. His fevered mind mingles real people with his fictional characters, and his past with his present. As his condition grows more desperate, he is dispatched to the charge of the eccentric psychiatrist Dr. Gibbons. Initially reluctant to confront his tortured past, Dark is gradually lured out from the "cave in the rocks" under which his spirit has crawled. Dark is visited in the hospital by his ex-wife, whom he fears his sleeping with a character from his past and conspiring to steal the screenplay he wrote years ago of his first novel, The Singing Detective. But nothing is exactly what it appears here. In his hallucinatory state, Dark re-imagines the plot of his novel, casting himself in the starring role of a gumshoe who doubles as a singer in a dance band.

Alfre Woodard
as Chief of Staff

Dani Wylie
as Dancer
View All

Critic Reviews for The Singing Detective

Audience Reviews for The Singing Detective