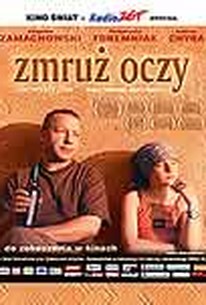 Jasiek (Zbigniew Zamachowski of Krzysztof Kieslowski's Three Colors: White) is a former teacher, and the caretaker of a farm in the Polish countryside. He seems to lead a fairly uneventful life. But then Mala (Ola Proszynska), a rebellious ten-year old girl, runs away from her wealthy home and comes to hide out on his farm, bringing along her pet eagle. Soon, Jasiek is visited by the girl's mother (Malgorzata Foremniak) who threatens him, and her father (Andrzej Chyra), who insults him. They both insist that Jasiek use his influence over their daughter to get her to return home. When he's unable to convince the willful kid to move out, he finds himself in danger of losing his meager livelihood. He has to work out some kind of a deal with Mala and her parents. In the meantime, some friends visit from the city and throw a lively little party on the farm. Squint Your Eyes, writer-director Andrzej Jakimowski's debut feature, won a FIPRESCI Special Mention at the 2002 Mannheim-Heidelberg Film Festival "for a promising debut, presenting a variety of well observed characters in a poetic yet realistic setting." The film had its U.S. premiere at the 2003 Tribeca Film Festival. ~ Josh Ralske, Rovi

There are no critic reviews yet for Zmruz oczy (Squint Your Eyes). Keep checking Rotten Tomatoes for updates!