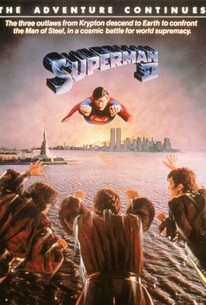 The humor occasionally stumbles into slapstick territory, and the special effects are dated, but Superman II meets, if not exceeds, the standard set by its predecessor.

Between giving up his super powers, confronting criminals from outer space, and having problems with his girlfriend, it's a bad time to be the Man of Steel in this sequel to the 1978 blockbuster. When terrorists threaten to destroy Paris with a thermonuclear device as they hold reporter Lois Lane (Margot Kidder) hostage, Superman (Christopher Reeve) comes to the rescue and flings the weapon into space. However, its blast outside the earth's orbit awakens Zod (Terence Stamp), Ursa (Sarah Douglas), and Non (Jack O'Halloran), three villains from Superman's home planet of Krypton who were exiled to outer space for their crimes. Zod and his partners arrive on Earth and use their powers in a bid to take over the U.S., and then the world. However, when Lois realizes that mild mannered Clark Kent and Superman are actually the same person, he brings her to his Fortress of Solitude, where his decision to marry Lois costs him his remarkable strength. Without his super powers, how can Superman vanquish Zod and save the world? Gene Hackman, Ned Beatty, Susannah York, and Jackie Cooper return from the first film, which was shot at the same time as parts of the sequel.

E.G. Marshall
as The President

Hal Galili
as Man at Bar