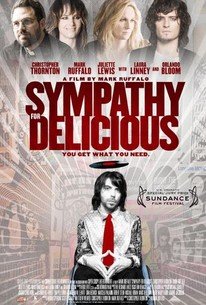 SYMPATHY FOR DELICIOUS marks acclaimed actor Mark Ruffalo's first foray into directing. This inspired and unusual film tells the story of Dean O'Dwyer (Christopher Thornton), also known as "Delicious D," an up-and-coming DJ on the underground music scene in Los Angeles. When a motorcycle accident leaves Dean paralyzed, he abandons his turntables for a wheelchair as his once promising career disappears before his eyes. Forced to live out of his car on skid row, Dean begins his descent into depression when he meets Father Joe Roselli (Mark Ruffalo), a passionate young priest. Father Joe introduces Dean to the world of faith-healing, an unlikely way for him to begin his quest to walk again. He soon discovers that he possesses the otherworldly power to heal people, but in an odd twist of fate, he is utterly unable to heal himself. Despite Father Joe's warnings, Dean angrily decides to use his newfound gift for fame and fortune. He joins a rock band led by charismatic front man The Stain (Orlando Bloom) with bassist Ariel (Juliette Lewis), and manager Nina Hogue (Laura Linney). But his newfound notoriety is unable to cure the hurt that encompasses his life. To find true healing, Dean must ultimately confront his worst demons and come to terms with his own humanity. SYMPATHY FOR DELICIOUS is an edgy rock-and-roll spiritual journey that explores the lasting effects of tragedy, the search for meaning, and the ultimate redemptive power of compassion. -- (C) Maya Releasing

Orlando Bloom
as The Stain

Robert Wisdom
as Prendell
View All

News & Interviews for Sympathy for Delicious

Critic Reviews for Sympathy for Delicious

Audience Reviews for Sympathy for Delicious