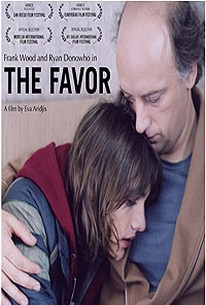 Following up the acclaimed documentary Children of the Street, filmmaker Eva Aridjis made her narrative-feature debut with this bittersweet drama starring Frank Wood and Ryan Donowho. Wood plays Lawrence, a man who decides to take in Johnny (Donowho), the troubled teenaged son of his recently deceased high-school sweetheart. Twenty-five years ago, Caroline (Paige Turco) broke Lawrence's heart. These days, Lawrence is a single, middle-aged photographer leading a quiet life with his loyal canine companion in Bayonne, NJ. When Lawrence receives a surprise phone call from a recently divorced Caroline, romantic feelings are rekindled and his life suddenly takes on new meaning. Unfortunately, a life with Caroline wasn't in the cards for Lawrence, because shortly after the high-school sweethearts reconnect, Caroline dies in a sudden and tragic accident. Now, in order to prevent Carlone's troubled 16-year-old son, Johnny (Donowho), from being placed in foster care, Lawrence adopts the boy and tries his hardest to be a caring father. But Johnny wants nothing to do with Lawrence, instead choosing to follow in his biological father's footsteps by becoming a petty criminal and constructing an impenetrable wall of anger and silence. It seems that the only person capable of breaking through to Johnny is Mariana (Isidra Vega), a pretty neighborhood girl with whom the boy forms a warm bond. In time, Johnny begins to realize that Lawrence is a respectable role model and caring father figure who is willing to make the sacrifices needed for him to have a brighter future.

Sterling K. Brown
as Policeman No. 1

Ken Martin
as Policeman No.2

Jayne Haynes
as Waitress in Diner
View All

Critic Reviews for The Favor

Audience Reviews for The Favor

There are no featured audience reviews for The Favor at this time.