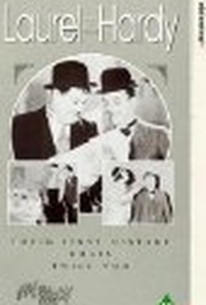 In spite of a sudden end which makes this Stan Laurel and Oliver Hardy two-reeler seem incomplete, there are quite a few wonderfully funny moments. Arabella Hardy (Mae Busch) is more than fed up with her husband Ollie, who has been spending all his free time with his pal Stanley. Their domestic squabble is interrupted by the phone -- it's Stan, asking if Ollie wants to accompany him to a cement workers' bazaar. Ollie tries to pretend it's his boss, Mr. Jones, which causes Stan to carefully check his mirror to make sure who he really is. Mrs. Hardy, however, is not so easily fooled -- mostly because Stan comes over to say it was him, not Mr. Jones, on the phone. The resulting explosion from Mrs. Hardy causes Ollie to hide out at Stan's. To solve this marital dilemma, Stan suggests that Ollie adopt a baby, which will draw Mrs. Hardy's attention away from her husband's extracurricular activities. Ollie likes the idea and comes home with an infant in his arms. But it's too late -- Mrs. Hardy is gone and a man Billy Gilbert shows up with papers for both of the boys -- Ollie is being sued for divorce, and Stan is being sued for alienation of affections. When Stan tries to take his leave, Ollie is outraged and scandalized. As a result, Stan gets to share Ollie's misery as they stay up, trying to keep the baby quiet and fending off angry neighbors when it cries. The picture ends with the boys asleep in bed with the baby, but Stan's the one sucking on the bottle.

Critic Reviews for Their First Mistake

There are no critic reviews yet for Their First Mistake. Keep checking Rotten Tomatoes for updates!

Audience Reviews for Their First Mistake

There are no featured audience reviews for Their First Mistake at this time.