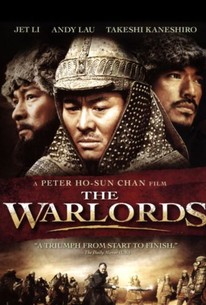 Love, politics, and loyalty threaten to tear apart three soldiers in this lavish historical epic from Hong Kong. In 1870, the power of the corrupt Qing Dynasty has been threatened by the rise of a revolutionary army, led by religious fanatics, and civil war is tearing the nation apart. Pang Qingyun (Jet Li), a good man who finds himself fighting for the Qing leadership, is one of the only survivors of a bloody battle in between revolutionaries and Qing troops, and is looking for someplace to go when he's offered shelter by a beautiful peasant woman, Lian (Xu Jinglei). Pang and Lian spend the night in each others arms, and he finds himself falling in love with her. Pang sets out to make his way home when he's befriended by Zhao Erhu (Andy Lau) and Jiang Wuyang (Takeshi Kaneshiro), a pair of bandits. When Jiang is attacked in an ambush, Pang helps save his life, and the three men become blood brothers in a gory ritual. Pang convinces Jiang and Zhao to join him in the fight against the revolutionaries, and with their help Pang is able to achieve some impressive victories. However, when Pang allows his own ego and dreams of glory to override his common sense and loyalty, Zhao and Jiang come to distrust their ally, and matters become worse when it is revealed that Lian is Zhao's wife. Tou Ming Zhuang (aka The Warlords) was a major box-office success in China and Eastern Asia before making its way to theaters in Europe and the United States.

Critics Consensus: Titans Is Not A Kraken Good Time
View All