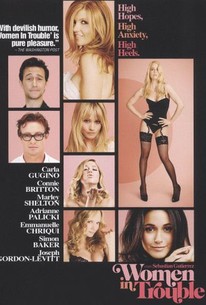 Sebastian Gutierrez certainly has an eye for the beauty of the female form, but Women in Trouble lacks a compelling script or point of view to go with its curvaceous visual appeal.

Filmmaker Sebastian Gutierrez writes and directs this ensemble comedy following ten Los Angeles women over the course of 24 hours. When porn starlet Electra Luxx (Carla Gugino) discovers that she's pregnant, her wild world of pleasure and excess is suddenly turned upside down. Subsequently stuck in an elevator with neurotic Doris (Connie Britton), Electra realizes she's standing at a pivotal crossroads in life. Meanwhile, adult film up-and-comer Holly Rocket (Adrianne Palicki) struggles with her reluctance to go girl-on-girl in front of the cameras by putting on a private show with her sexy friend Bambi (Emmanuelle Chriqui), a therapist (Sarah Clarke) turns to the bottle after discovering her husband has been unfaithful, a flight attendant (Marley Shelton) applies for membership in the Mile High Club with a famous passenger, and a precocious teen (Isabella Gutierrez) realizes that the adults in her life aren't nearly as well adjusted as they'd like her to believe.

News & Interviews for Women in Trouble

Critic Reviews for Women in Trouble

Audience Reviews for Women in Trouble