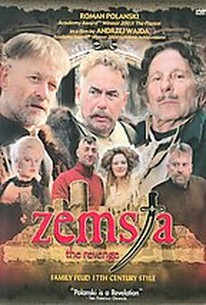 One of the most important figures in the Polish cinema, director Andrzej Wajda, teams up with the nation's most famous filmmaking expatriate, Roman Polanski, in this light comedy based on a perennially popular stage farce by Aleksandr Fredo. Czesnik (Janusz Gajos) and Rejent (Andrzej Seweryn) are the combative scions of two prominent families fallen on hard times, both of whom have the poor fortune of having homes which share a common courtyard. Czesnik's niece Klara (Agata Buzek) has fallen in love with Waclaw (Rafal Krolikowski), Rejent's son. However, Rejent has promised his son to Podstolina (Katarzyna Figura), a beautiful widow who has attracted Czesnik's eye. Meanwhile, Papkin (Roman Polanski), a former nobleman short on both cash and courage, hopes to wed Klara, but as a neutral party in the feud between the two clans, Klara thinks she might be able to use Papkin for her own purposes to bring her together with Waclaw. A major box-office hit in Poland, Zemsta marked the first time Wajda and Polanski had worked together since Pokolenie in 1952. ~ Mark Deming, Rovi

Cezary Zak
as Perelka
View All

There are no critic reviews yet for Zemsta. Keep checking Rotten Tomatoes for updates!