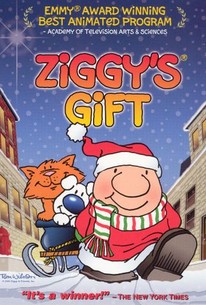 Ziggy, the comic icon, comes to life for the first time in this Emmy Award winning, animated feature film packed with all the love and good cheer of the Holiday Season! In this classic Christmas adventure, Ziggy and his faithful dog Fuzz take a job as a street Santa to raise money for the poor. Surrounded by crooked Santas, sneaky thieves and suspicious cops, Ziggy remains honest and kind. His selfless giving to others makes us smile and feel again the warmth and happiness of true Holiday Spirit. Created and written by Emmy winning Ziggy Cartoonist, Tom Wilson with animation from award winning Master Animators Richard Williams (Who Framed Roger Rabbit), Eric Goldberg (Aladdin, Beauty and the Beast) and Tom Sito (The Lion King, Shrek) and music and lyrics written by Grammy winning composer Harry Nilsson, Ziggy's Gift is a genuinely heart-warming Holiday Special - a gift to be treasured and enjoyed year after year. approx. 24 mins. col. Special Features: About Ziggy's Creator, Tom Wilson / Ziggy Animated Film Shorts / Ziggy Holiday Comic Strips / Ziggy Meets the Masters / Spanish Audio Track

There are no critic reviews yet for Ziggy's Gift. Keep checking Rotten Tomatoes for updates!

There are no featured audience reviews for Ziggy's Gift at this time.